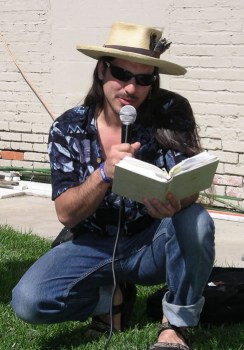 These are some of my poems. Everything here is Copyright © Tom Swiss. The Hounds Of Hell will forever be nipping at your heels if you try to represent any of it as your own, so there.

I've been writing and performing poetry since 1993. I was a regular at the open mics at College Park's Planet X (I appeared in the documentary Poets From Planet X) and Java Heads, and then after I moved to Baltimore I was often found at the readings at the late lamented Funk's Democratic Coffee Spot. Since then I've been a featured performer at numerous events and venues including the SoweBohemian Festival, Minas Gallery, 2640 Space, the Baltimore Ethical Society, the Load of Fun Gallery, the Harford County Poetry Society, and the Instant Gratification series at Gallery 788. These days I usually try to mix in a song or two at any poetry reading I do.

I hosted an open mic at the original One World Cafe in Federal Hill for a few months back around the turn of the century, and I currently more-or-less coordinate the weekly Zelda's Inferno poetry workshop.

(By the way, I am not this poet Thomas Swiss, nor any relation to him. He's probably a decent guy and all and I wouldn't want you to blame him. I'm the Tom Swiss from Baltimore. (Not the lawyer Tom Swiss from Baltimore, though he is a cousin; I'm the hacker/poet/karate-ka/bodyworker/singer/songwriter one. To help keep us all straight, to the left is a photo of me from a reading at the 2005 SoweBohemian festival. Photo by Doreen Peri. I wish I looked that cool in real life.)

My work has appeared in the PoetryInBaltimore.com anthology Octopus Dreams, in Zelda's Zine, and in the indie. I really ought to get off my butt and send more stuff out for publication.

Information about upcoming performances of poetry and music, and other appearances, can be found on my home page.

This is mostly old stuff. Since most venues won't publish previously published works, and they include web publishing in that restriction, new stuff will be added only once I've given up hope of publication (or less likely, managed to get it published somewhere...), so my favorite new stuff ain't here.

However, some writing exercises from Zelda's Inferno and works in progress can be found at my blog (old blog, new blog.)

Some of these works cover controversial topics or contain strong language that may not be suitable for children - or for many adults, for that matter. The easily offended need proceed no further.

Unpublished, but notorious: Note to my Chain Smoking Friends

"Once, we were free..." - about the net and censorship. Written mostly so I could put on a blue ribbon, go to open readings, and have an excuse to talk about the CDA while on stage. 1996. (A few printed copies of the zeroth edition of Bizarre Acts of Poetry are available; inquiries to tms at infamous.net)